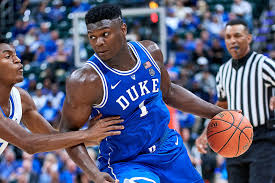 Williamson is ready to play hard but not allowed to by the Pelicans.

After successfully completing surgery for a torn meniscus and spending the past 3 months in rehab, Zion Williamson is now ready to play. BUT the Pelican’s won’t let him play serious ball until he rebuilds his running technique.

How long to rebuild his running technique is anyone’s guess. So far, throughout the entire rehab process, the Pelican’s have been tight lipped with any details often being scant.

Understandably the Pelicans are being cautious with the return of Williamson to the hard court, but is wrapping up their prized recruit in cotton wool the way to go?

Weighing in at a massive 129kg, it is well known that Williamson is the second heaviest player in the NBA league at a height of only 6 ft 6. In comparison LeBron James is 6 ft 7 weighing in at a feather weight of 113kg.

Maybe Williamson is more heavy boned than James, but perhaps the better way to approach his recovery is to reduce his weight and strengthen his core muscles, rather than to rebuild his running technique?

In any event, the Pelicans are in no hurry to bring the excitement machine back into full team scrimmages. At present Williamson remains in solitary confinement performing shooting drills with one on one trainers.

Rookie of Year Odds plummet on the softly softly approach

Throughout the rehab process, Williamson’s Rookie of the Year (ROY) odds remained as the favorite, with Ja Morant a distant second. At first, these odds seemed reasonable as there was an expectation that he would be back before end of 2019 destroying oppositions with his phenomenal play.

However, with the recent revelation that the Pelican’s will hold back Williamson – way past the expectation of the late December return – his ROY odds have taken a beating. Still, Williamson is a respectable third favorite to win the ROY honors, but even this appears to be too kind.

Williamson is out of action indefinitely, it is unknown whether he will even realistically take to the floor in this NBA season. And even if he were to play ball, the organization is clearly unwilling to allow him to play any significant minutes.

This is a ridiculous approach to managing Williamson’s return to playing basketball.

Why purchase a fast car if you are simply going to keep it in the garage?

Let Williamson play hard! That’s what the fans want, that’s what he wants.

The Pelicans know they have a star player on their hands. But their approach for this young man’s return to the court is ludicrous.

For those who have bet on Zion Williamson to win the ROY this year, don’t hold your breath.

It will take a miracle for Williamson to play, let alone a significant amount of minutes to prove he deserves being the ROY for 2019/2020.