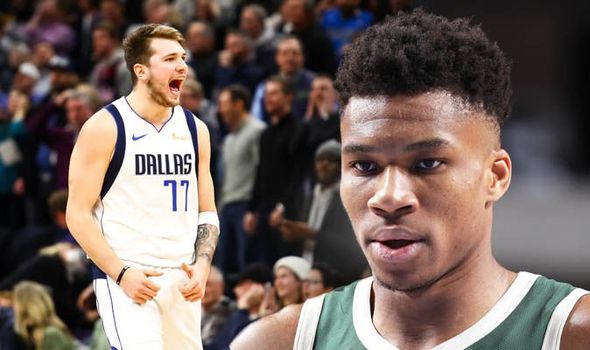 Who would you choose as NBA MVP right now?

The race for regular season is heating up with the usual star players in the running: Lebron James, Kawhi Leonard, James Harden, Paul George and a whole stack of others.

But the two front runners at this point in time are Giannis Antetokounmpo and Luka Doncic. Without doubt these two players are playing out of their minds, and are leading the pack. Giannis’ stats speak for themselves, while Luka’s story from the relative unknown to MVP contender is a Hollywood story in the making.

The sportsbooks have Giannis well ahead as the favorite to win, but I beg to differ.

So who do you think is going to win MVP for the regular season?

My heart says Luka, but my head says Giannis.

Why does my heart say Luka

Luka is leading the popularity stakes in being the MVP for this year. Fan’s love him, the coaches and players love him, heck he was even called “A bad Mother F#$ker” by the LeBron James himself.

He carries himself with such passion and exuberance, but not the kind that is outright over the top or arrogant. There is a maturity about him, that belies his age. Perhaps this is because he has already played professionally for several years in the EuroLeague? But even so, there are players who have played in the NBA for several years that still exude immaturity that extends well beyond that of Luka’s.

Luka is unique in that his persona appears to be true on the court and off the court. What you see is what you get, and what you see is a committed young man who enjoys his basketball. Steve Kerr compared his persona to that of Steph Curry. They both play with a smile on their face, more typical of playing street ball then the hard thick serious look of a pro baller.

And in this regard, it is quite refreshing. We are tired of the hard nosed serious player. The super competitive borderline trash talk, the sneering dirty looks given to opposing players and convey the message, “I own you!” Yes, this makes for great drama, but the game shouldn’t always be played like that.

But I suppose, it isn’t simply his persona but a combination of his style of play. On first impressions when you watch how Luka plays, you may not think that he is the most gifted of players. He is not overly fast and quick, he isn’t super tall, athletic and strong and he doesn’t play above the rim. He plays like everyone else that is average! Nothing really stands out for him.

No doubt, looks can be deceiving – Luka is of course playing at a level that all of us can only dream about. But though they maybe dreams, what Luka does is in the realms of possibility for us mere mortals. He dribbles with control, he shoots the ball with confidence, he rarely get’s above the rim, he isn’t bursting with outrageous speed. Why can’t we all play like him? We can do that.

Similar to the transformative nature of Steph Curry, who made three pointers all the rage. For at that time, we mere mortals believe too believed can shoot three pointers like him! For those who don’t have the hops to touch the back board, if we practised shooting enough, we too could be a force to be reckoned with. And thus we all spent hour and hours, days and nights launching the three ball with a Steph Curry singlet.

We can now also train to be like Luka, which should be a lot easier. For Luka his game appears to revolve around basketball IQ. He is crafty and tricky, but he can also play with a team in a meaningful way. He passes unselfishly, he enjoys playing with others and makes team plays. We too, can do that if we work as a team!

Luka is a player that we can all easily identify with, and that’s what makes his story so compelling.

However, let’s not discount that this young man has the stats that has led to records being broken at a tender young age of 20! Against the Golden State Warriors, Luka became the first ever play to achieve multiple triple doubles in thirty minutes or less! He has been praised with being the best 20 year old ever, even surpassing that of the great LeBron James. He is powering the Dallas Mavericks to a winning record, a team that lacks the supporting cast that other superstars have.

So why not the others for MVP? For starters the other MVP contenders have all won it before. LeBron James, dare I say, has been there and done it before. Yes – we are taking his greatness for granted, I admit that, but the story is becoming stale and repetitive. James Harden is a lighting it up like no tomorrow. An offensive juggernaut that is leading to causing opposing defenses to play high school box and one. Kawhi Leonard is more machine than human, how can anyone identify with him. And Anthony Davis is playing second fiddle to LeBron James, so he can’t take MVP.

My heart says that Luka should win the MVP for this season. He is the next breath of fresh air that the league is looking for.

Why does my head say Giannis

Last year’s reigning MVP is in the head to win it again this year. Driven to improve beyond obsession, he is on a mission to destroy oppositions, both through his offense AND defense. This man wants to be the best that he can, no ifs or buts. Pre-season training we learn that Giannis is muscling up and we learn that he is shooting threes day in day out to be like Steph Curry.

It would not have been possible to believe it, but it is true! Giannis has taken his game to another level. He is like a man playing among boys, dominating the game. When watching the Milwaukee Bucks play, it seems like he can always switch to another gear. It is on call, and when he needs to power the Bucks to a team he can flip that switch on. We know when Giannis is getting serious, because the points start to flow, the defense tightens up and boom, the Bucks come out with a win.

In looking at the stats, Giannis exceeds that of Luka’s in points scored, field goal %, 3 point %, rebounding and blocks. He only trails in the assists category and draws even with steals.

In my opinion, Giannis is ahead slightly with points scored per game, but his efficiency is really what stands out. If a basket is needed, he is the man that can get you that bucket! No if’s or but’s, he can bully his way to the rim, or he can shoot the outside shot.

On the downside, he averages approximately three less assists per game than Luka. It is not a huge difference, given that he makes up for it with the extra rebounds per game.

It’s clear that statistically Giannis is the better player, and in that context the head says Giannis will win MVP for this season.

Tell me what you think

Luka is the Cinderalla story for this season. He is breaking records, leading the Mavericks up the winners ladder and is doing it with style. If he can keep up this standard of play until the end of the season, plus lead the Mavericks deep into the play offs, my heart says that he should win MVP.

Giannis statistically should be awarded the MVP. He is just so much better on all fronts offense AND defense, that with this deadly combo, teams find it hard to contain him, plus to score against him and the Bucks as a whole. Similar to Luka, he doesn’t not have a strong supporting cast, however, I do believe the supporting cast at the Bucks is better than Mavericks. But, my head says Giannis to win MVP.

I’m keen to hear your comments. Please Leave a Reply down below!